How I learned to fly in LOTRO's Middle Earth

Ever wondered why you can't fly a beast in LOTRO. Yes? Maybe the answer to this silly question is, that you never really tried it. So, if you think you cannot fly, you will surely never learn to fly!


The first step to learn to fly is to watch out for every opportunity in the game to see yourself flying or to find strange floating objects. Of course its impossible to really fly in the game, but - at least - you can imagine it. And thats fine, since the whole game is designed for your own imagination.

Now and then you find yourself in a strange stance. Some really weird glitch can give you the imagination of floating. For example if you just left the stable for a fast trip from Michel Delving to Breetown.

Be very quick if you catch such a scene, and take a screenshot! *

So where to begin? First, start to monitor your environment very thoroughly. For example, when i traveled to Eregion - a lvl 50 region - a noticed a bush of blackberry floating in the air. Very curious indeed! 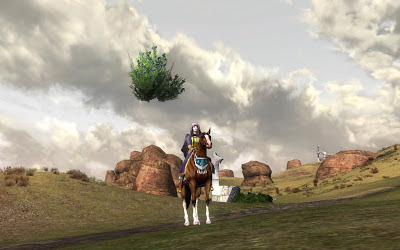 A stange floating bush of blackberries as noticed in southwestern Eregion. Is this a Middle Earth satellite point for blackberry owners? Who knows? Sadly i forgot my communication device, so i never found out. But search for them in Eregion, maybe you find these strange blackberries too!

*) a screenscot can be taken by pressing the Prt Scr (Print Screen) button. You will find your pictures in My Documents,in the Map: The Lord of the Rings Online.


LESSON 2 - HOVERING AROUND THE STABLE

The next step in your flying lessons is to hover in the sky, just imagine that your horse is gone. I experienced this at the stables near Michel Delving several times. Be quick and capture these strange scenes. You never know when it will occur again! It seems to occur always when you are travelling by horse. So the secret to learn to fly is: get a horse and watch out! 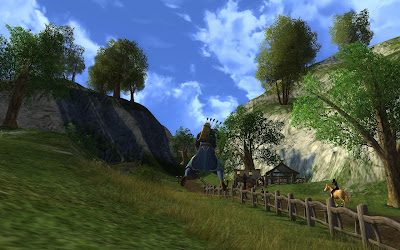 Wow i can fly at Michel Delving! 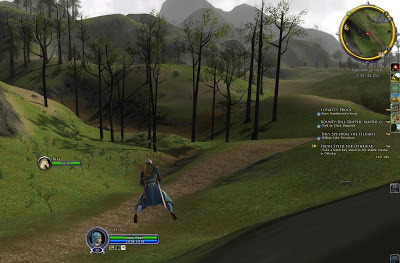 I never believed in flying in LOTRO, but it occured to me in Nan Amlug West too! Thrilling!

So after reading all this stuff, you thought I was boosting about some strange glitches? Who knows, but if you get a grip of this, you will finally find yourself high in the air. Like the horse of Sleipnir from the Old Norse Gods. Of course Lotro did not designed flying as a skill, but its a game about imagination. And at some weird places you can really fly, free as an angel, like the gods of old time! Try it yourself! Start to be a believer!

The pictures are real and not Photoshopped and taken at a certain spot in eastern Rohan.


LESSON 4 - FLYING IN THE SHIRE

Today, 17 October 2013, was an absolutely brilliant day for flying in the Shire. It happened when I entered the Shire from the Brandy Hills in Breeland, and crossed the Brandywine river into Greenfields (south of Scary). When I walked on the grass I heard a strange splashing sound and had the impression I was lagging. Then I jumped and jumped and jumped, and I thought .... lets take a picture a picture of myself flying between the stars and the moon. It was bit fake, since I jumped so high in the sky. Or ... was it not? After a moment I realized that I was constantly hopping in the sky, like a clumsy bird, some meters above the ground. I decided to fly further, and lo and behold: I was flying in the sky.

Here some pictures of my first solo-flight above the Shire, from the Bridgefields to Stock, a detour to the Brandywine Bridge, then to Hobbiton-Bywater, a peek above the Party Tree near The Hill, a short hovering above Rushock Bog and finally a soft landing at Sandson's Farm.

Below you will see some pictures from my first solo-flight in the Shire. Other pictures can be found on my wonderful lotro page (click here)


Maybe some of you don't believe that you can fly in Lotro's Middle Earth. Those are the non-believers, apparently worshiping the god of Photoshop. But luckily I had a witness. In Michel delving I met a kind caprain, Sir Tileon, and he agreed to take some pictures when I was doing my solo-flight above the Party tree near the Hill. Just watch the pictures kind Sir Tileon took, and be amazed!


secret: died falling down the waterfall, when you do, just retreat
Gepost door Elannah op 03:34