Climbing the waterfall of Woodhall

Do you remember the early times before you reached the magical level 20 ceiling?
Maybe you have visited the Marish or Woodhall in the Shire.

Today i decided to go back to my early days and to enjoy the Shire again. Its a cosy place, even for high level players. There are many small waterfalls, and one I remembered pretty good.

Just south of Woodhall, in Green Hill Country,  is a pretty high and scenic waterfall. Its to the west of a place full of huge brown bears. Yes, I think you will remember it now! Its the dangerous bear den, west of a hideout with lots of very nasty villains. 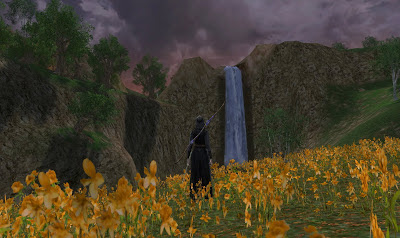 In a field of flowers i watched the high waterfall south of Woodhall in the Shire. And I started to dream. To the right you can see a grassfield and a single birch. Would it be possible to reach that place and climb the steep rocks? And after that, to take an excursion to that impressing high waterfall?

I tried many days to find a good spot to climb. I found a huge bear den, would that be the right place to climb higher into the mountains? 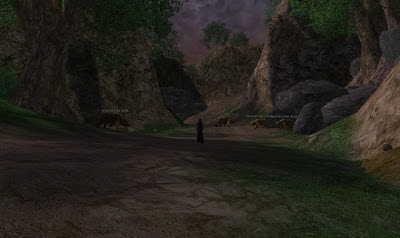 A gloomy bear den, somewhere southwest of Woodhall and at the end of Narrowcleeve, a notorious Thieves Hideout. 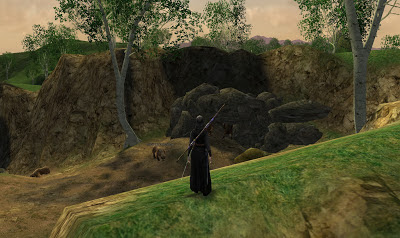 Near the waterfall there is a bear den with some round boulders to climb. If you manage to climb upon the rocky ridge, you will have a beautiful view above the bear den. Glad these brown monsterous bears didn't noticed me, although they seemed pretty docile! Maybe they are highly sought by hobbits for their fairs near Bilbo's Hill? Dancing bears are such a delight to see, especially when they try to eat a hobbit... 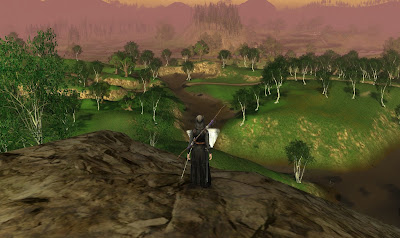 If you climb somewhat higher you can see another waterfall, right near the road to the Marish and Breeland. These hights are pretty scare, so don't get vertigo. Otherwise you will find yourself lying in the river beneath this granite rocks. Incapacitated of course! 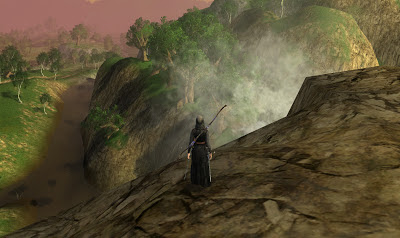 The waterfall is a real marvel and you can see its foam from a great distance. Its like an eternal fog cloud, just above the rocks. Beneath you see the river which floats to the Marish. The sound of all that water is spectacular! 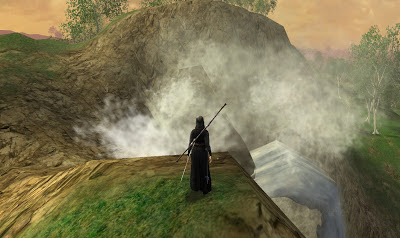 I managed to climb near the waterfall and i noticed a strange curve at the origin of the waterfall. You can see it just to the lower right corner. Strange, I cannot explain that curve by gravity alone. Would it be that beneath the curve lives a benign being? Who knows...